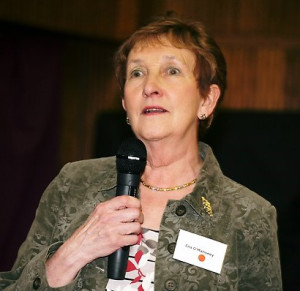 Two Emergency Motions were passed at the APM. The first motion called on the Government to address without delay the current dispute in the public services due to the effect it was having on Older People in relation to pensions and other social and medical services. This motion was proposed by the Finglas Division of the ISCP and got full support from the delegates.

The other emergency motion demanded that medical card renewals for Older People be immediately extended for a period of two years as the HSE figures show that the vast majority of Older People qualify. This motion was passed unanimously and in the context of the backlog – running into thousands – in renewing medical cards. It was also proposed that all new medical cards should be for a three year period rather than the current two years.

State Pension Contribution Payments: Motion 3 criticised the unilateral suspension of payments to pensioners who miss a week in collecting their pension. This has only arisen since the replacement of the pension book with a plastic card. The recent rejection of pensions for 85 farmers’ wives was also heavily criticised. (Note that the farmers’ wives pensions have since been restored – congratulations Wexford.)

Living Alone Allowance: This allowance consists of €7.70 per week added to the pension and has not altered in 12 years. There is a pressing need for a substantial increase.

Universal Social Contribution: Concern was expressed about the effect of replacing PRSI, the Health Levy & the income levy with a USC & its effect on pensions.

Home Help Services: Motion 10 praised the work of Home Helps & Carers & called on the Government to support their work.

Financial Abuse: Older People should be protected from scam artists & cowboys who leave their victims afraid to live alone.

Universal Health Care: The APM called for a Universal Health System which provides care for all, free at the point of delivery on the basis of health and social care need.

Medical Cards: Motions 14-18 all called for the restoration of the medical card to all over-70s and the removal of prescription charges.

Dental & Optical Benefits: These benefits must be restored.

Mental Health: The neglect of public psychiatric hospitals was condemned.

Nursing Home Support Scheme / Fair Deal: The current scheme should be scrapped & replaced with a scheme based on the 1992 Mercer Report.

Taxes and Charges: The proposed Property Tax and Water Charges – as they impact on Older People – should be opposed.

Community Support Scheme: Along with restoring the Scheme, alarms for Older People should be zero VAT rated.

Safety & Security must be made a priority & the work of the Community Garda was praised.