Older People are facing a variety of challenges in their lives today – now more so than ever before – according to the Irish Senior Citizens Parliament. 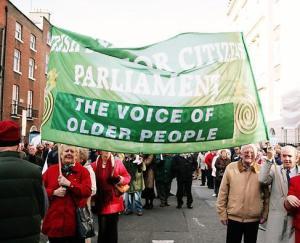 2009 brought Irish people the continuing banking and credit crisis, the Nursing Home Support Scheme, the introduction of the National Asset Management Agency (NAMA), the “Bord Snip Nua” Report, a supplementary Budget as well as Budget 2010, the continuation of the over-70s Medical Card crisis and the withdrawal of the Additional Christmas Payment. There were further threats to cut existing and future pensions and other entitlements as well a promise of further levies.

We face in 2010 the prospect of a Carbon Tax, metered water charges, the introduction of prescription charges and a decrease or abolition in waivers for waste charges as well as VAT on local authority charges. The over-70s medical card debacle continues with the backlog in renewing medical cards. We also perceive an effort to abolish all Universal Payments and in particular to change some of the entitlements for Older People.

These and other issues will be discussed at the Annual Parliament Meeting of the Irish Senior Citizens Parliament this weekend. The ISCP urges the incoming Minister for Older People to implement the vision set out in “Towards 2016” and provide the necessary supports to enable Older People to maintain their health and well-being as well as to live active and full lives in an independent way in their own homes and communities.

The 14th Annual Parliament of the ISCP will take place in the Liberty Hall Theatre & Conference Centre from 2.00pm today, Friday 26 March, to 1.00pm Saturday 27 March 2010. The Annual Parliament provides the ISCP’s affiliated member organisations with an opportunity to promote the views of older people, to set policy for the Parliament and to elect officers for the coming year.

Among the issues to be discussed at the Annual Parliament will be pensions, medical cards, prescription charges, water charges and the withdrawal of the Additional payment at Christmas.