One Year On – What Fate Awaits Older People In Budget 2010? 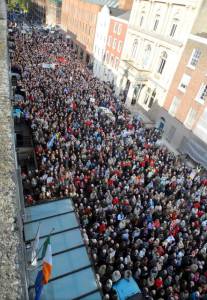 On 22nd October it will be one year since thousands of Older People from the length and breadth of Ireland protested at Dáil Éireann against the withdrawal of the medical card for the over 70s. That protest, organized by the Irish Senior Citizens’ Parliament, was the result of an attempt by Government to break faith with Older People on an issue which they considered to be vital to their health and wellbeing.

On that day Sylvia Meehan, President of the Parliament and recent recipient of a prestigious People of the Year award, said that

research has shown that access to the medical card has led to a decline in serious illness amongst the over 70s. It is good value for everybody. It keeps us out of expensive hospital beds.

In that show of strength Older People showed that they are not ready to sit quietly in the corner and await their fate. We were proud of all of them and of ourselves in that manifestation of solidarity, strength and camaraderie which was so evident that day.

The ISCP believes that Older People’s health & welfare needs to be moved to the top of the political agenda. “We expect in this Budget that the vulnerable – and especially Older People – will be protected. We have made our Pre-Budget Submission to Government and we expect them to deliver for Older People”

Continuing she said “Among the main points which we have stressed are:

We should judge our government by how it treats society’s most vulnerable. We hope the government demonstrates its concern by protecting Ireland’s older citizens in Budget 2010